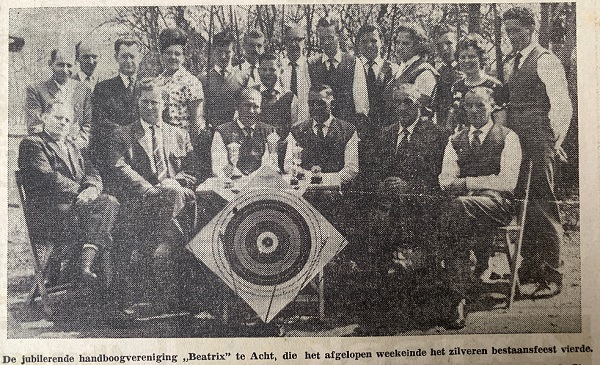 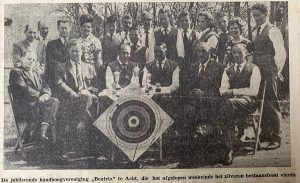 Acht, April 22. — With a Holy Mass, which was celebrated at nine o’clock by Pastor W. Vermeer in Acht, a start was made with the celebration of the silver anniversary of the archery club “Beatrix” in Acht.

In café “In den goeden borrel” the board with the patron and the people with their ladies sat at a coffee table after this Mass, during which Mr. P. Stallen, chairman of district 8 of the Dutch Federation of Archers, conveyed his congratulations on behalf of this Association. He paid tribute to the four jubilees, who have been members of “Beatrix” since its founding. Especially Mr Antoon v. d. Schoot, nestor of “Beatrix” who was chairman for 15 years and honorary chairman of “Beatrix” for ten years, received a lot of praise. Mr Piet Bloks, the current chairman, was also praised by the Federal Chairman for his jubilee and great merits for “Beatrix”.

Also honored was Mr. Trudo Ebben, the man who has been king of “Beatrix” for many years and has even brought it to an emperor’s title. Mr J. v. d. Sangen was honored for his anniversary. Mr. Van de Stallen pinned all four jubilees with the silver jubilee pin on the lapel, after which Mr. P. Bloks, as chairman of “Beatrix”, thanked them on behalf of the jubilees. After this ceremony, the board and the Federal President went to see Mr Th. v.d. Heijden, the man, who has also been a member since its foundation, but has been in bed for the past fifteen years. However, he sympathizes with all the activities of “Den Doel”. He too was awarded the silver pin, while he was also presented with a huge fruit bowl.

We use cookies on our website to give you the most relevant experience by remembering your preferences and repeat visits. By clicking “Accept All”, you consent to the use of ALL the cookies. However, you may visit "Cookie Settings" to provide a controlled consent.
Cookie SettingsAccept All
Manage consent

This website uses cookies to improve your experience while you navigate through the website. Out of these, the cookies that are categorized as necessary are stored on your browser as they are essential for the working of basic functionalities of the website. We also use third-party cookies that help us analyze and understand how you use this website. These cookies will be stored in your browser only with your consent. You also have the option to opt-out of these cookies. But opting out of some of these cookies may affect your browsing experience.
SAVE & ACCEPT